As an expectant mother of twins, I had to surrender so many naive notions about what first-time motherhood would now look like for me. As I reluctantly relinquished fantasies of a blissful maternity leave spent globe-trotting with my singleton baby strapped to my front, perfectly balanced by the rucksack on my back, there was one aspect of mothering that I refused to compromise on, namely breastfeeding my precious pair. 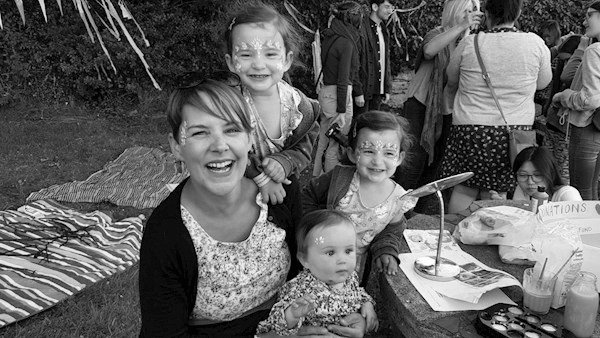 Me (Kear Brain), to my immediate right, Aoibhin Murphy (Twin 2, aged 3 years 5 months, who still loves her boobie), Isla Murphy (Twin 1, aged 3 years, 5 months and 2 minutes older than her sister, who self-weaned from the breast at 25 months), and on my lap, my latest nursling, baby Caitlin-Rose Murphy, now 10 months- still boobin’!)

Never one to shy away from a challenge; or take kindly to being told that I can’t do something; successfully breastfeeding my multiples became this mama’s mission. So, in addition to the not insignificant business of growing two humans simultaneously, while navigating pregnancy-related challenges on the double, this became my other pregnancy project.

Ever-mindful of the myriad unknown, uncontrollable factors, and increased risks that inevitably accompany a twin pregnancy, I embraced my Type A personality, and set about trying to control the situation in the only way I knew how — reading, researching and talking with other multiple mamas.

Happily, my initial reading and research gave me two key things: the reassurance that it was possible, and the confidence that I too, could do it.

My desire, and determination to breastfeed reflects both a broader philosophy of how I choose to mother my children, and my position as a feminist. It encompasses far more than a decision about food and nourishment. As Gabrielle Palmer asserts in her seminal work, The Politics of Breastfeeding:

Breastfeeding is an inadequate word because it is not merely putting food in a stomach, it is also our first experience of love and it works both ways.

Unfortunately, myths about breastfeeding multiples abound. The most oft-cited being that it’s impossible to produce enough milk for two babies. As breastfeeding works on supply and demand, it is entirely possible to exclusively breastfeed twins. Also, the more placental tissue you have, the more milk-making tissue your body creates (Wiessinger et al, 2010).

The supposed difficulty in nursing after caesarean birth, which is statistically more likely with twins, may also undermine a woman’s confidence in her ability to breastfeed. Fortunately, this was not borne out in my experience following a Gentle Caesarean, a technique developed by Smith, Plaat & Fisk (2006), which is now standard practice at University Maternity Hospital, Limerick.

Since beginnings matter when it comes to stimulating milk supply, I stated my intention to breastfeed in my birth preferences; highlighting my desire to avoid early separation and enjoy uninterrupted skin-to-skin contact immediately after birth. Practices that signal the body to release the right cocktail of hormones to establish a plentiful supply — namely, oxytocin, the so-called Hormone of Love, and prolactin, the milk-making hormone.

Although breastfeeding is arguably the most natural way to feed our babies, it certainly doesn’t always come naturally to everyone, myself included. Breastfeeding, like therapy, is not something that can be learned from books. Rather, it needs to be experienced and practiced extensively before one feels proficient.

Breastfeeding is fundamentally about relationship — arguably the most important one of all. Nursing as a motherly art, and expression of maternal love, develops in partnership with our babies. And like all relationships, while not always easy, it is usually worth it.

In more traditional societies, girls learnt how to breastfeed by watching other women in their family and community. With the dissolution of the ‘Village’, and increasing numbers of women mothering in isolation, we are no longer so readily exposed to this effortless transmission of women’s wisdom from one generation to the next. Hence the importance of mother-to-mother supports. Indeed, women helping other women remains the most effective form of breastfeeding support.

As I ventured into the wonderful world of multiples and breastfeeding support, I felt I had found the beginnings of my ‘Mammy Tribe’.

Realising that I was in good company of other equally committed and passionate, mothers breastfeeding their twins, and more.

For me, having a tribe of other, like-minded mothers was, and continues to be, essential to the maintenance of both my sanity, and the ability to hold a vaguely coherent conversation.

This process, which began while I was pregnant, became particularly important during maternity leave when I found myself out of (paid) work for the first time in my adult life. At home, alone, with sole responsibility for the survival of two utterly dependent beings.

At times it was unbearably lonely.

As I gazed out of the window into the impenetrable cloud of Atlantic sea-mist that shrouded our home for so much of the winter of 2015, I wondered how many other mothers were, like me, sitting alone in their homes, cradling their babies with their hearts silently breaking from the isolation, sleep-deprivation-induced bewilderment and overwhelming nature of it all.

Regardless of how you feed them, mothering multiples is a marathon, catapulting us waaayyy out of our comfort zone, and daily pushing us beyond the limits of what we

previously believed possible. And if you’re a highly organised, perfectionistic control freak like me, you WILL struggle with the chaos, and you’ll ultimately survive.

When people ask me what it’s like to have twins, I tell them with searing honesty, the brutal truth that they broke me. And us. Then, when I feared I couldn’t take anymore they began to rebuild me, such that I gradually became the mother they needed, rather than the one of my own idealistic imaginings.

What to expect: Twin Challenges- The Good, The Bad and The Just Plain Tired

In the service of honesty and transparency, breastfeeding twins should probably come with the following health warnings:

Expect to be tired. More tired than you ever thought possible. The good news is, sleep deprivation won’t kill you (apparently). Although there are times when it really feels like it might. Fortunately, like all things mothering-related, the old maxim that “This too shall pass”, applies.

The silver lining is that because breastmilk is always available, at the perfect temperature, requiring no preparation, you might get more sleep/rest by breastfeeding, especially if you choose to co-sleep. You will be held captive by your tiny minions for extended periods, day and night, especially during bouts of crazy cluster-feeding. Delegate or outsource everything else, and focus on feeding your babies, especially during the fourth trimester, which begins at birth and lasts for the first three months of life.

When parenting twins solo, there’s a limited repertoire of ways to simultaneously soothe two cranky babas, (popular strategies usually require one pair of hands per baby). This is where breastfeeding really comes into its own, as one of the few things that will invariably settle even the most fractious souls.

Breastfed babies know when they’re onto a good thing. Don’t expect them to relinquish it readily or easily. All my babies shunned the bottle, despite my best efforts and significant financial investment in every possible combination of teats and bottles to persuade them otherwise.

The world will see your breasts, and, if you’re anything like me, you will quickly cease to care. Tandem feeding demands more hands than the Hindu Goddess Durga, so covering myself for modesty’s sake in addition to effectively latching two hungry horrors was inconceivable.

Finally, remember, in the words of La Leche League;

breastfeeding is not a race, it is not a competition, it is an ongoing journey with no specific date for reaching your destination

As women, we need to relearn to trust our instincts and listen to our own inner wisdom. As we reconnect with our innate ability to nourish and sustain life; reclaiming the immense power within our amazing bodies, we come to deeply know and trust that just as we grew and birthed our babies, of course, we can feed them too. And when we do, both we, and our babies benefit immeasurably. When I embarked on this journey, I didn’t set out to be an ‘extended’ breast-feeder; I just followed my children’s lead. I continue to be woken each morning, not by the baby sleeping beside me, but by the sound of twin number 2 padding into my room asking in her little-girl voice, “Mummy, can I have your booooobie?” And I wouldn’t have it any other way.

You can view the Irish Examiner Article here.

Manage Cookie Consent
To provide the best experiences, we use technologies like cookies to store and/or access device information. Consenting to these technologies will allow us to process data such as browsing behaviour or unique IDs on this site. Not consenting or withdrawing consent, may adversely affect certain features and functions.
Manage options Manage services Manage vendors Read more about these purposes
View preferences
{title} {title} {title}